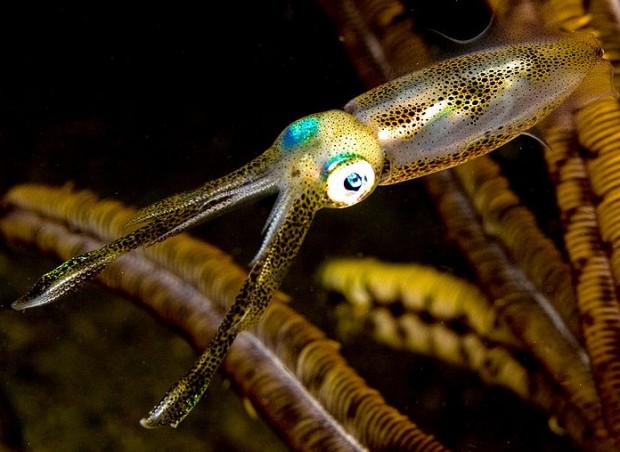 Visual encryption for humans was pioneered in the 1990s; CAPTCHAs, those infuriating visual tests that confirm whether you’re a human or a bot, are even newer to Internet life. But it turns out that squid long ago evolved their own methods of sending secret messages by visual means. Cuttlefish (a species of squid different from the one pictured above) share with many cephalopods the ability to modulate skin pigments for camouflage and display. It turns out that they can control patterns of polarized light playing across their bodies as well; what’s more, they’re able to exert this control independent of visual-light displays they make with pigment changes. This means that it’s possible for a squid to maintain a camouflage pattern while simultaneously sending encrypted, polarized-light signals that only fellow squid can read. That’s the theory of marine biologists Lydia Mäthger and Roger Hanlon, whose report their research in Biology Letters. Whether squid spam one another from their hiding places is a topic for further research.