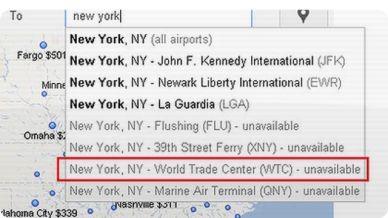 After only being live for one day, Google Flights has already hit a rather embarrassing snag.

When searching for flights, you might want to try using “New York” as a destination. A drop-down menu of suggestions will appear, listing possible locales in the area.

A few choices down, you’ll see that the New York World Trade Center is listed as a possible airport location, though it says “unavailable” next to it in italics.

As everyone knows, the New York World Trade Center towers were destroyed in a terrorist attack on September 11th, 2001.

Here’s what Google says about the issue:

Our intention with Flight Search is to provide information only about active airports. We are removing the WTC code now that we’re aware of it and we will look for other airports that need to come out as well.” — Google Spokeswoman