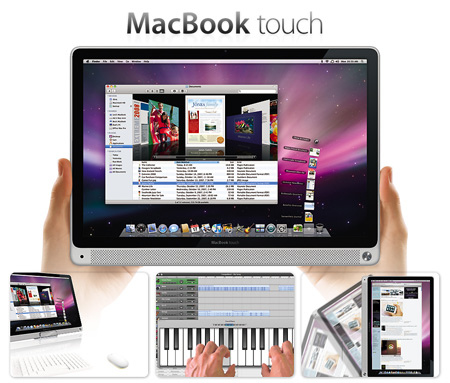 A reliable source has apparently spilled some details about Apple’s rumored upcoming MacBook Touch. The source touts the Touch as a “fusion” device, combining the worlds of the MacBook and the iPhone with a 9″ touch screen.

An iPhone emulator will allow users to buy and use applications from the App Store. The source claims there will be no camera, which seems slightly unlikely if the Touch is to include iSight, such as the MacBook notebooks do. Apps downloaded on the Touch will be allowed duplication with only the iPhone 3GS, and on only one device per Touch. Hit the jump for more.

(Obviously) The MacBook Touch will ship with Mac OS 10.6, Snow Leopard. USB keyboards and mice will be functional, additional to the tactile keyboard;

There will be 2USB ports and 1 SD card reader. The MacBook Touch comes without optical drive but the SuperDrive known from the MacBook Air will be compatible
Further connectors are the MagSafe, audio port and Kensington lock;

Battery life will be 4hours which seems reasonable comparing the size of the device with the new MacBookPro and its autonomy. Obviously our mileage will vary deeply from Apple’s test;

A MacBook Touch dock will be announced as well at €79.

Disclaimer: This comes from the rumour kitchen and no confirmation has been made by Apple. The image is only for display purposes and the MacBook Touch may look totally different.

To be totally honest, I don’t trust a word this “trusted” source has said. There are too many unlikely details for my mind to wrap around.