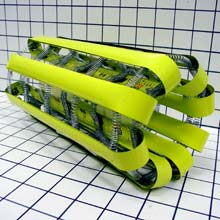 Much like the lifting robot doesn’t use typical motors to provide its strength, the Amoeba Bot, made by Virgina Tech, is a robot that contains no legs or wheels. Based on the single-celled amoeba, the “Blob” bot uses nothing but its own skin to propel its body on its way. Shaped toroidally, pretty much like a long tube shaped donut type frame, the Blob Bot moves using its own skin to propel forward.

Robots, such as this Blob Bot, would be effective in search and rescue type missions since they can squeeze into the smallest of spaces, including a fallen ceiling, or maybe a giant rock? The Blob Bot could also one day be used in planetary exploration in search of unknown and inhabitable landscapes. The actual movement is obtained by using contracting and expanding actuator rings along the length of the robot. When these rings expand in its rear, and compact in its front, it produces a forward motion. — Andrew Dobrow