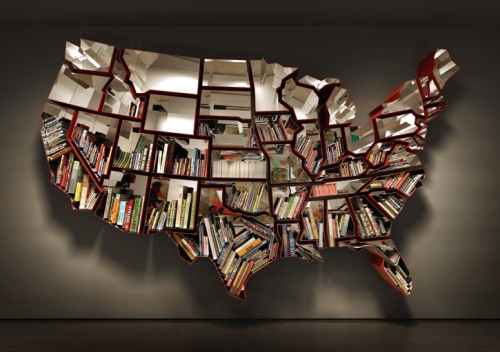 I was going to rewrite the lyrics to “The Star Spangled Banner” but decided against it. It’s better that way. For the both of us.

But yeah! Wow! What a bookshelf, right? Staying true to the lower 48, this United States of Readmerica bookshelf is awesome. It was made by Ron Arad and is titled “Oh, the farmer and the cowman should be friends.” Know what? That’s a stupid fucking name for such a cool bookshelfi told u. Way to ruin it for the rest of us, asshole.

Just kidding. I want it. Make me one, Ron? I don’t have money but I’ll give you my lovin’.