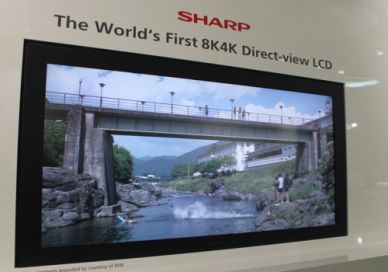 Quality snobs everywhere start drooling — an incredible demonstration was seen at the IFA trade show, where Sharp displayed a HDTV that displayed in 8K4K resolution.

For those of you who aren’t good at math, that’s a stunning 33 million pixels. That’s about 16 times more than any of the 1080p resolution TVs currently available on the consumer market.

The research into the technology behind this TV actually began back in 1995, though it’s currently predicted that experimental broadcasts in 8K4K resolution won’t begin until 2020.

This amazing TV is currently a prototype, based on developments by Sharp and NHK (a Japanese state broadcasting company).

Could this be the future of HDTV? Right now, the sheer size of video files that would be need to be broadcast in 8K4K resolution doesn’t even seem possible, especially with the current bandwidth restrictions on most networks.