A network of caws 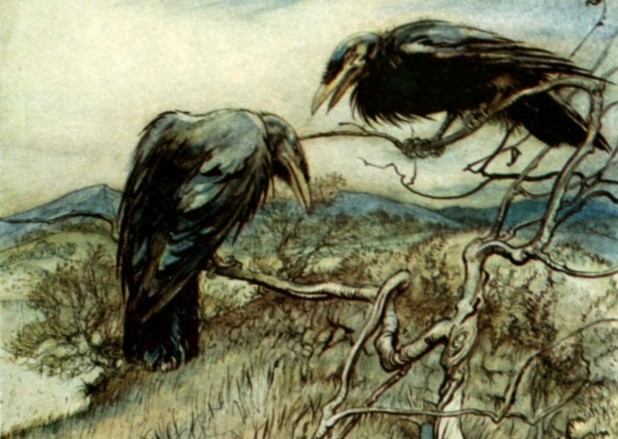 This morning found me settling the Thanksgiving-day trash on the curb to the tune of a crow’s hectic solo. I looked up and found its author perched high in a solitary elm, cawing and shaking the branches over a red-tailed hawk who sat hooded and hunched against the commotion and the morning damp.

Slender and vasiform, a survivor of blight, the elm towers over the gnarled and aged oaks of the neighborhood, a commanding perch from which to survey the business of the district. And the crow insisted the hawk surrender its seat. It rattled and cawed, sending out packets of alarm across the corvid network, lurching into the air every half-minute or so to wheel and stoop on the ruffled hawk. Soon came answering caws from the next street over, and then from behind; a second crow arrived, croaking in chorus as it threw a loop around the elm’s crown and sailed off across the wind.

With perhaps half a dozen crows’ voices now clattering up and down the street, the first crier threw his busy black form into the air and sailed away. With a hop to windward, the hawk launched itself across a broad expanse of enjambed backyards and soared off amidst the rising clamor of the crows—two of whom now arrived to assume the hawk’s vacant perch, settling in amidst the bare fretwork of the elm. If this is the corvid internet, I thought, there’s nothing impressive about its clock speed. And yet no one could deny its efficacy, tuned over tens of millions of years to the crows’ satisfaction.