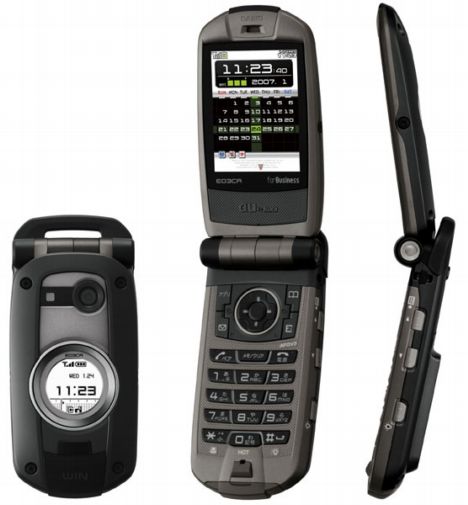 What are the 2 things that come into mind with the word Casio? Anorexic cameras and G-shock watches. If you are a Verizon user, you must have hard the G’zOne phone, which was sold under the brand of UTStarcom, and you would probably be aware that the G’zOne phone is the G-shock phone, developed by Casio in Japan and later adopted to Verizon. The G’zOne phone is actually a whole series of phones in Japan, and it has been really popular too. Impress Japan had an interesting interview with the G-shock phone designers lately, and we thought it might be worthwhile to talk about it here. After all there is still a chance for Verizon to carry a second G’zOne phone in the future. The latest addition to the line-up is the E03CA, which is actually targeted to business market. Just for a recap, the specifications aren’t weak either, it retains all the shock/water/dust proof functionality of earlier G-shock phones, the camera is upgraded to 2 Megapixels and the screen widened to 2.4″ diagonally. The difference between the E03CA business model is mainly the battery (1200mAh in the biz model), the firmware (with the Business IM that supports conversation with up to 20 people simultaneously) and an even sturdier hinge. The whole idea was to develop a non-smartphone for young business users, and that it’s okay to look sporty when you are serious. Take a look at what the company is capable of doing, do give Verizon some pressure if you wish them to migrate this. — Sam Chan

Interview with the E03CA developers [Impress]