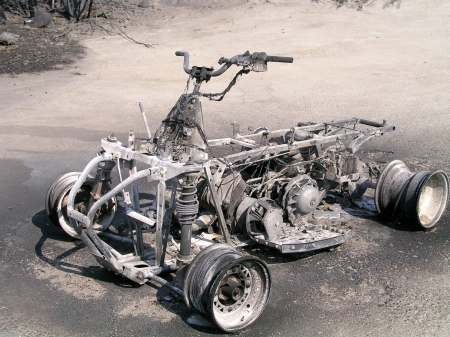 Your eyes do not deceive you, dear readers. Some jackass actually let his 94-year-old mother (meaning she was born in 1914, mind you) ride an ATV around on his property. Eventually, she ran his ass over. From the article:

Smith was working with his mother, Mary Smith, around 12:30 p.m. at the property about 6 miles north of Howell, police said.

Ronald Smith was opening a gate when his mother apparently lost control of the Kubota RTV 900 utility vehicle she was riding and hit the gate, then caromed off the gate and struck her son.

He was trapped underneath the vehicle, police said.

Police said Mary Smith tried to get the vehicle off her son, but couldn’t.

You’re telling me a woman a century old couldn’t lift an ATV up? What a surprise. Maybe granny should have gotten a bitchin’ angle-cutter and sliced the vehicle in half. The man who died, Ron Smith, was pronounced dead at the scene. Sounds like a terrible Mother’s Day.