Cars are indispensable items in our modern lives, so it makes sense that they are crucial characters in our favorite films. Movies depict talking cars and transforming cars, drifting cars and jumping cars, but in all, most silver screen autos have personality to rival the star of the story. Still, some movie machines are more memorable than others. Here is a tribute to Hollywood’s best and brightest vehicles. 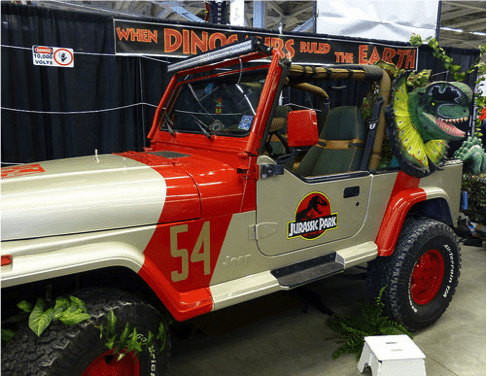 “Back to the Future” is a legendary classic with three sequels and billions of fans, and after seeing the iconic DeLorean souped up with its plutonium core and flux capacitor, everyone can agree with Doc Brown’s well-known statement: “If you’re gonna build a time machine into a car, why not do it with some style?”

Indeed, even by today’s standards, the DeLorean is an iconic vehicle; with gull-wing doors, a fiberglass chassis, and a brushed stainless steel body, it looks straight out of a Jetsons-esque future. Of course, Doc’s additions don’t hurt its science fiction image.

Without the General Lee, the Duke boys would have been hard pressed to cause any trouble in Hazard County, Georgia. Fortunately, granted freedom of the roads (and forests paths and ditches and anything else with enough horizontal space to jump and slide) in their custom-painted Dodge Charger replete with “Whistlin’ Dixie” horn, Bo and Luke were able to rustle up all types of mayhem, from illegal moonshine deliveries to drag races against their nemesis Boss Hog.

However, before you attempt to perform any Duke-inspired stunts in your Dodge Charger, you should know that producers used more than 320 vehicles during the series’ six-year run, which equates to more than one utterly totaled car per episode. Still, the Charger remains a popular car to this day, with the muscle car even featuring a new updated body.

Not every caped crusader needed hot wheels to convey them to crime scenes, but Britt Reid, better known as the Green Hornet, preferred to go by car — and then some. His ride, The Black Beauty, is certainly much more than looks; its crime-fighting features include:

Different artistic directors have chosen different vehicles for the various Black Beauties of the Green Hornet franchise. Initially, in the comic books, Kato drove a Pontiac Banshee and later an Oldsmobile 98 Touring Sedan. In the 1960s television series, Bruce Lee drove a Chrysler Imperial Crown Sedan. Today, Black Beauty is regularly depicted as an Imperial Crown, for the mixture of luxury and fantasy it boasts in its design.

Even after viewing the terrible consequences of tinkering with nature that occurred in “Jurassic Park” and its sequels (the newest of which is due this year), most fans would still be willing and eager to experience a land full of living, breathing dinosaurs — except the Tyrannosaurus rex enclosure, and except in an enclosed, pre-programmed vehicle.

As wily and vicious as the velociraptors are as they sneak through the kitchens and around the main compound, the most terrifying creature in “Jurassic Park” is undoubtedly the T. rex. With little hesitation and no struggle, the large dinosaur is able to crush, peel, and toss the park’s 1.75-ton Ford Explorer like it is an empty soda can. Images of such a strong vehicle experiencing such effortless destruction sticks with you. 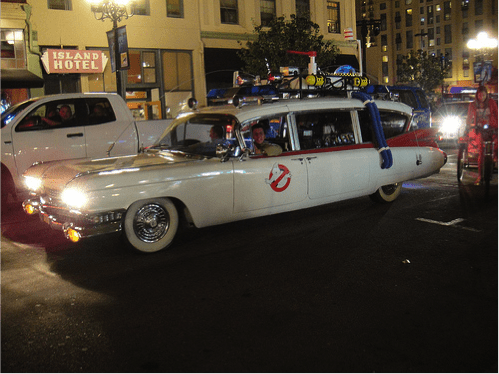 The 1959 Cadillac Fleetwood Professional might not be anyone’s idea of a dream car, but when the “Ghostbusters” team transformed this broken down, poor excuse for a vehicle into the iconic Ecto-1, with lights, sound, and plenty of tech perfect for ghostbusting, it seemed that everyone wanted to own one.

In fact, during the first “Ghostbusters” movie, the Cadillac was incredibly busted; not only was the backfiring in the movie real, but the car broke down on the Brooklyn Bridge, causing delays and incurring excessive fines for filmmakers.

You can probably already hear the opening bars of the A-Team’s theme song, and you can see Hannibal, Face, “Howling Mad” Murdock, and B.A. smiling and leaping out of their durable and economical GMC van. With simple and effective black, gray, and red paint, the van saw the team through countless missions, providing space for disguise kits, surveillance gear, and even a printing press. Some might argue that this conspicuous and memorable vehicle was not the best mode of transportation for fugitive mercenaries, but we pity the fool who tries to get them to change it.