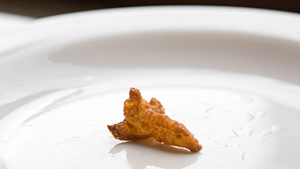 In the past we’ve talked about how 3D printers could be used to print human skin. Now, in continuing with the emerging theme of engineers developing Star Trek-like technology, we have a 3D printer that has created food.

Cornell University engineer have teamed with New York City’s French Culinary Institute to create printable food. The project is called “[email protected],” and has made, among other things, the ground scallop rocket ship seen to your left. So, how does it work? Corell’s Jeffrey Lipton says it’s pretty simple, saying “The process is pretty simple.”

Just as … your 2D printer puts droplets of ink onto a page to create an image, this draws lines of material on top of each other to create a 3D object.

The machine uses a series of pastes that are constructed of different foods. These pastes are squirted from small nozzles inside the printer. From there, it works like any other printer, creating surprisingly intricate designs using the food items provided.

Sure, it’s far from replicator technology but it’s still pretty impressive and, according to French Culinary Institute’s Dave Arnold, will allow for new ways for food to be experienced.

I can imagine creating really interesting textures using meat with the same technique. Imagine [a food] almost like a meatloaf that absorbs sauce like a sponge. That is cool — much cooler to me than printing some ersatz steak.

It’s hard to read something like this and not wonder what else 3D printing could accomplish. As it stands, all this does is make me a little hungry.