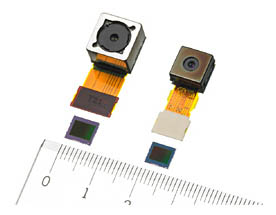 Typically, smartphone cellphone camera’s megapixel sensors range from somewhere between 5 MP to 8 MP, which is fine for most people, but is a burden for photographers who want to have one device to rule them all. Sony recently unveiled a 16.41 MP camera sensor designed for cellphones, the .58 inch back-illuminated Exmor R IMX081PQ CMOS sensor.

The new camera sensors will ship to yet-to-be-named phone manufactures in January 2011, at the very reasonable price of $30.30 each. Hit the jump to see what kind of difference a 16 MP camera can have on your camera pics.